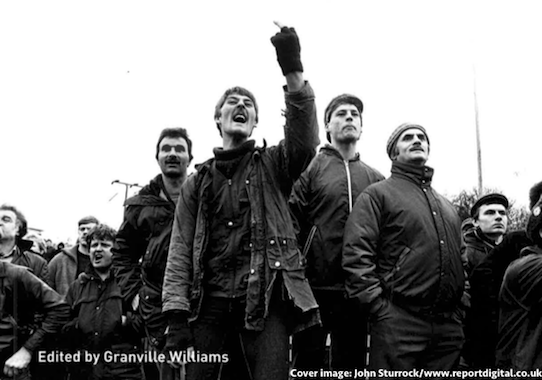 A new radical, illustrated anthology highlights the links between music, politics and protest during the miners’ strike.

Mention the miners’ strike of 1984-5 and most people will remember Thatcher and Arthur Scargill. What they may not say is ‘community’. And yet the most important aspect in terms of British history was the strength of community which propelled and sustained that strike and stretched from the pits of Orgreave to the solidarity of Australian seamen. Here in the beautifully produced Pit Props: music, international solidarity and the 1984-85 miners’ strike edited by Granville Williams of the Campaign for Press and Broadcasting Freedom, community is recalled and celebrated in pictures, poetry, music, memoir and excerpts from broadcasts.

This political book to complement the ‘With Banners Held High’ events, with contributions from journalists, academics, teachers and photographers, may mark the end of coal mining (with the closure in December 2015 of Kellingley mine) but it also deals with unfinished business – the ongoing campaign for a public inquiry into the viciously brutal policing deployed against the miners on 18 June 1984 (‘Battle of Orgreave’) and the dangers in the privatisation (often to the benefit of foreign companies) of power supplies.

There is something in these recollections and reflections of the heyday of labour solidarity – its naturalness, its generosity, its innocence almost – which, much as films on the Grunwick strike a decade earlier do too, bring a lump to the throat. Where today are those French trade unionists organising summer holiday treats for their English counterparts’ children, the Cricklewood postal workers refusing to touch Grunwick mail? Global markets and restrictive laws might be putting paid to direct acts of labour solidarity. But surely we still have the capacity to build communities of resistance and reinvigorate those traditions and values that came from the best of the labour movement to meet today’s iniquities: poverty, unhealth, unhousing, workfare, nativism.

Pit Props can be ordered online at www.cpbf.org.uk. Or send orders with cheques for £12.99 made payable to ‘With Banners Held High’ to WBHH, c/o 24 Tower Avenue, Upton near Pontefract, WF9 1EE.