Submission to the Independent Investigation into antisemitism within NUS 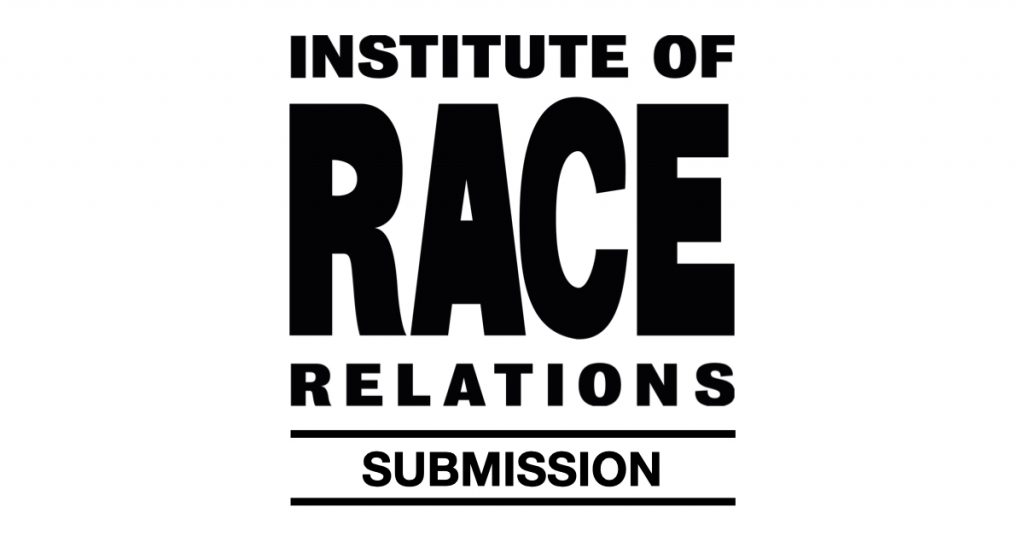 Earlier this year, an independent investigation into antisemitism within the NUS was set up under the direction of Rebecca Tuck QC. Below is the IRR’s submission.

The Institute of Race Relations (IRR) was established as an independent educational charity in 1958 to carry out research, publish and collect resources on race relations throughout the world. As the oldest race relations body in the UK, with a proven expertise on combating all forms of racism, we are responding to your call to ‘all interested parties’ to submit evidence to your investigation into antisemitism within the NUS. As the recommendations of your investigation will have ramifications for the racial justice sector as a whole, we believe it is of the utmost importance that the IRR brings to your attention existing best practice/core principles in the area of protecting students from antisemitism (and all forms of racism), while maintaining freedom of speech, good race relations and community cohesion in the student body as a whole.

The terms of reference of your inquiry invite those who submit evidence to cite dates of matters that give cause for concern. In this respect, we would cite 26 April 2017, the date of the incorporation, at the NUS National Conference, of the International Holocaust Remembrance Alliance (IHRA) definition of antisemitism, as a key date and event for consideration by the inquiry. It is our contention that the incorporation of a controversial and indefinite definition that has no legal standing in international or domestic law, needs to be considered a very significant factor in the deterioration of relations between students from Black and Minority Ethnic students’ organisations and Jewish students’ organisations, making more difficult the urgent task of building consensus around policies and practices that educate against antisemitism and other forms of racism.

The IRR tried to indicate core principles going forward in its evidence to the Labour Party Inquiry into anti-Semitism and other forms of racism including Islamophobia.i Here, we where we identified difficulties in dealing with antisemitic and racialist prejudices that have arisen from the blurring of the line between what incites hatred and what merely gives offence. This began in the 1980s, in the gradual shift of meaning of ‘racism’ from the objective to the subjective, a personalising of racism, allowing it to move from something tangible, and subject to prosecution, to anything that gives hurt, offence or discomfort. We were particularly concerned that the incorporation into policy of any definition of antisemitism or racism should be objective and legally sound, as confusing definitions would introduce subjectivity into debates. Far from clarifying matters of antisemitism or racism, they could open the way to personal interpretations and therefore cloud the issue, we warned.

It has to be acknowledged that within the student body certain communities will hold specific sectional views – be they religious, political or existential – as sacrosanct. But other members have a right to comment in these areas; that is clearly a matter of freedom of expression. It was in this context that we warned that the highly controversial IHRA definition of antisemitism, which extended the definition of antisemitism to include particular types of criticism of Israel, created an imbalance between protection from hate speech and upholding freedom of expression. Such a wide-ranging and effectively subjective definition could in fact make it harder, not easier, to distinguish bona fide critics of Israel from antisemites using anti-Zionism as cover, we warned.

In 2019, similar concerns were expressed by Kenneth Stern, director of the Bard Center for the Study of Hate, who helped draft the definition. As the American Jewish Committee’s antisemitism expert, Stern expressed regret that the ‘working definition of antisemitism’ as it was then called, had been weaponised by sectional interests into a ‘campus speech hate code’ and then incorporated into law, courtesy of a 2019 executive order issued by President Trump. Stern regarded Trump’s executive order as ‘an attack on academic freedom and free speech’, that ‘will harm not only pro-Palestinian advocates, but also Jewish students and faculty, and the academy itself’. Describing himself as a Zionist, he said that ‘on college campus, where the purpose is to explore ideas, anti-Zionists have a right to free expression’, adding that if he and others had been born into a Palestinian family displaced in 1948, he might have a ‘different view of Zionism, and that need not be because ‘we vilify Jews or think they conspire to harm humanity’.

3. Incorporation of IHRA definition in the UK

While there was no direct equivalent of a Trump executive order in the UK, it needs to be acknowledged that the incorporation of the IHRA definition into university policy came under government instruction. In October 2020, education minister Gavin Williamson instructed English universities to adopt and implement the International Holocaust Remembrance Alliance (IHRA) definition of antisemitism, threatening a loss of income if they failed to comply. As previously mentioned, the NUS had already incorporated the definition at its 2017 annual conference, following the letter by universities minister Jo Johnson underlining the obligation of UK higher education institutions to tackle antisemitism on campus and to abide by the IHRA definition. The NUS’ adoption of the definition was renewed in 2019.

The Department of Education’s 2020 instruction led to renewed disquiet amongst legal practitioners and antisemitism experts about the IHRA definition and its deployment. High profile legal experts objected, such as former Court of Appeal judge Lord Stephen Sedley, and Sir Geoffrey Bindman, a solicitor, legal advisor to the Race Relations Board and to the Commission for Racial Equality. A letter to the Guardian objecting to Williamson’s instruction to universities was signed  by both Sedley and Bindman, as well as Professor Bill Bowring, Lord Hendy QC, former Court of Appeal judge Sir Anthony Hooper, Michael Mansfield QC, Hugh Tomlinson QC and retired lawyer Frances Webber (a co-author of IRR’s current submission). David Feldman, Director of the Pears Institute for the Study of Antisemitism at Birkbeck, University of London, also criticised the definition and its imposition on universities, warning that, far from meeting the challenge of addressing racism on campus, it would ‘privilege one group over others by giving them additional protections, and in doing so will divide minorities against each other’. This bifurcated approach to racial justice, we would contend, provides necessary context to this investigation into antisemitism in the NUS, as it must surely take into account the wider circumstances behind the breakdown between organisations representing Black and Minority Ethnic groups, and groups representing Jewish students, on campus.

The student body, like society as a whole, will have in its make-up individuals with antisemitic and racist attitudes, as well as some with extreme beliefs who are prone to believing conspiracy theories. There can be no doubt that antisemitism exists on campus. The NUS has a duty to protect students from antisemitism, and all forms of racism, but they also have a responsibility to uphold freedom of expression on issues of Israel and the Middle East. Opposition to antisemitism and racism and support for freedom of expression are entirely compatible values, with free speech, when correctly handled and balanced against the first freedom, the freedom to life, being the best guarantor of good race relations and community cohesion on campus. Mindful of the wider responsibilities of this inquiry, we urge you to consider the wisdom of the NUS incorporation of the IHRA definition into policy making and what impact it has had on race relations and community cohesion on campus.