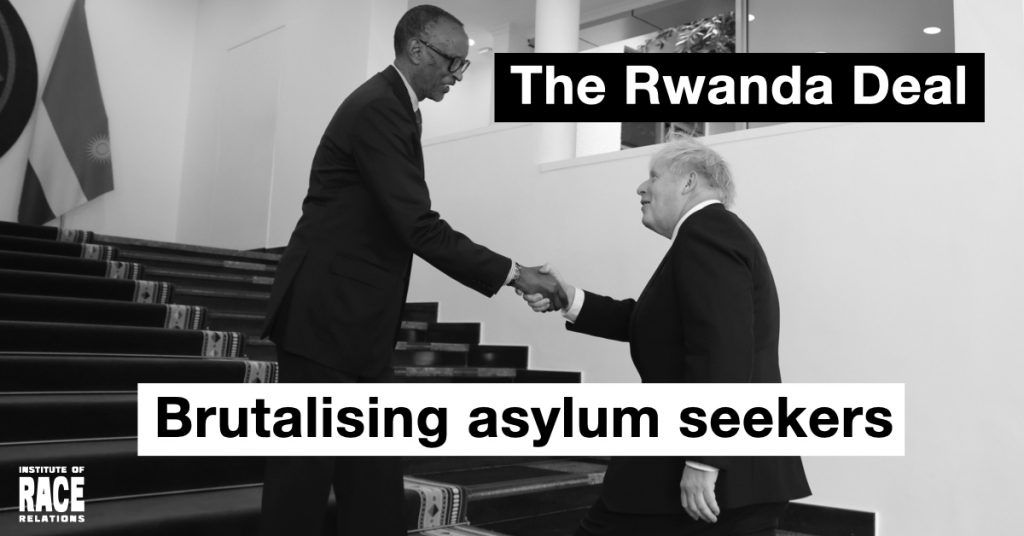 The plan to deport asylum seekers to Rwanda, described by the African Union as ‘xenophobic and completely unacceptable’, is just the latest and most extreme policy to feature in a long and worsening tale of cruelty unleashed by successive British governments on refugees, writes Tim Naor Hilton of Refugee Action.

It’s a story that started in the late 1980s, with visa controls imposed on Tamils from Sri Lanka and carriers’ liability imposed in 1987 to prevent their arrival, when the demographic of asylum applicants shifted from mostly European, eastern bloc dissidents to people from Europe’s former colonies in the Global South fleeing human rights abuses, persecution and conflict.  Asylum law became the new tool for governments to exclude racialised people from the UK, a job previously accomplished by successive immigration Acts in the 1960s, ’70s and ’80s.

As applicants had to navigate more complex rules and jump through ever smaller hoops, which accelerated through the 1990s and 2000s, so the public were being persuaded, largely by racialised media scare-mongering and myth-making to accept that an immensely complex and inhumane system was necessary.  For example, the 1999 Immigration and Asylum Act – which established the asylum dispersal system – was sparked by local media reports in Dover of visible Black and Brown people in the town’s public spaces. It was picked up by the Daily Mail and turned into a national and highly racialised crisis.

Racism and the colonial past

The UK’s colonial past oppressed, excluded and exploited people across the globe along racial lines.  Our failure to acknowledge this has meant this colonial past remains the foundation for the structural racism in our asylum system (and beyond), which spawned over-regulatory legislation in ’93, ’96, ’99, ’02, ’04, ’06, ’07, ’09, ’14, ’16 and now ’22 – with constant updates in between.

Each law was designed to oppress, exclude and exploit. Each made the system more complex to navigate, more hostile and rooted more deeply a culture of suspicion and based on the assumption that people from former colonies were fundamentally unwelcome and undeserving of our support and protection.

People seeking asylum are plunged into a labyrinthine, incomprehensible and hostile system on arrival. They are required to reveal and discuss  incredibly traumatic experiences in an environment where their credibility is being constantly tested. Evidence to prove their persecution is often so hard to find that many seekers are left waiting years. When applications are refused, reasons are wildly inconsistent – yet every refusal can be a matter of life or death.

People’s right to receive asylum support and accommodation is constantly questioned, payments are withheld, and asylum seekers are dispersed to often dangerous and decrepit homes. They are banned from working and supporting themselves and many end up on the street homeless and destitute as they fall through the cracks of this complex system.

When some Ukrainian refugees arrived without papers at the port of Liverpool in March, they were waived through, assumed to be bona fide refugees just through their nationality. This generous welcome and presumption of need is not however extended to those with racialised identities. Their lives don’t matter.

There is a popular strand of thinking that says we simply need to make the asylum system more efficient ‘end-to-end’, with cases processed more quickly and objective criteria applied. But this idea of ‘accuracy’ often dissolves when it meets reality and is experienced by those on the receiving end as a denial of their personal, traumatic experience. Like a perfectly designed and well-oiled machine, with inputs (people’s cases), lots of whirring cogs (decision-making) and a well-designed end-product (grant of asylum or refusal).

Such thinking is a myth and a dangerous one.  The layers of complexity and hostility built into the process might be considered natural, but they have been produced by governments that want to exclude the racialised refugees and deter others who might try to come here. The complexity was always a political choice shaped by the national and racial identities of people seeking asylum, such as Somalis Zimbabweans, Sudanese, Eritreans, Afghans, Syrians, Iranians.

When so much of the system has been built on the foundations of structural racism, it is the job of the department running it, in this case the Home Office, to explain how decision-making is not inherently racist – no easy task when ministers ignore their department’s Equality and Impact Assessments. There are people working in this system committed to doing a good job, committed to humanity, dignity and respect – some are actively working within the Home Office to highlight the cruelty of its policies. They, too, need to recognise how deeply hard-wired this structural racism is.

How can we campaign for better outcomes in this system when its nuts, bolts, cogs and inner workings are so innately designed to oppress and marginalise people with racialised identities? As it shed its Empire, the UK rebranded itself as a guardian of human rights, but the underlying structures of racism and oppression that shored up the Empire simply morphed into a structurally racist global and national order of which the asylum system is a product.

Ideas and plans for improving the efficiency of the asylum process have led to some improvements for people going through the system, but they do not fundamentally address its oppressive and brutalising foundations. Too many charities in the asylum support sector, Refugee Action included, spend too much time and money dealing with too many crises produced by the system. These crises are set in motion by political choices and decisions. Think what charities could achieve if this was not the case.

Following the grounding of the Rwanda deportation flight, high-profile commentators demanded to know how we will deport people who have been refused asylum. The common factor at both ends is the brutalising hostility of the asylum process. It leaves people broken.

Where do we campaign now?

What needs to happen for the UK to ditch the racism that underpins the asylum and immigration system and create a process grounded in justice and dignity?

Firstly, as an absolute minimum, we need to rip up the anti-refugee laws passed by the UK Parliament in March and abandon the cruel, inhumane and racist Rwanda deportation policy. Second, we need to acknowledge the legacy of colonialism and have a reckoning with our past, which includes the UK government, Home Office staff senior and junior, alongside charity campaigners.  This should involve an apology to all those over the years who have been brutalised by the process itself.

And we need to build on the tiny positives that do exist. For instance, Home Office policy still states that people should be granted refugee status on the balance of probabilities (though this is not how the system works in practice). But we can use that notion to say that if people make incredibly dangerous journeys across countries and oceans to seek safety, we should welcome them, like we do the Ukrainian refugee arriving without papers in Liverpool who gets waived through.

Also, the rate of those being granted asylum is running at 75 per cent and much higher for some nationalities than others, but decision-making for those refused is still random, inconsistent and disbelieving of people’s trauma. And those granted asylum can have been mentally destroyed by the process, the disbelief and the years and years of waiting in limbo.

A culture of welcome and a simple process to match could be transformative. This culture of welcome needs to include how people are supported, the places they are given to live in, having the right to work and being provided with mental health and therapeutic support. More than 200,000 people offered to open their houses to refugees from Ukraine. Why can’t this welcome be extended to refugees with racialised identities?

Tim Naor Hilton is the Chief Executive of Refugee Action