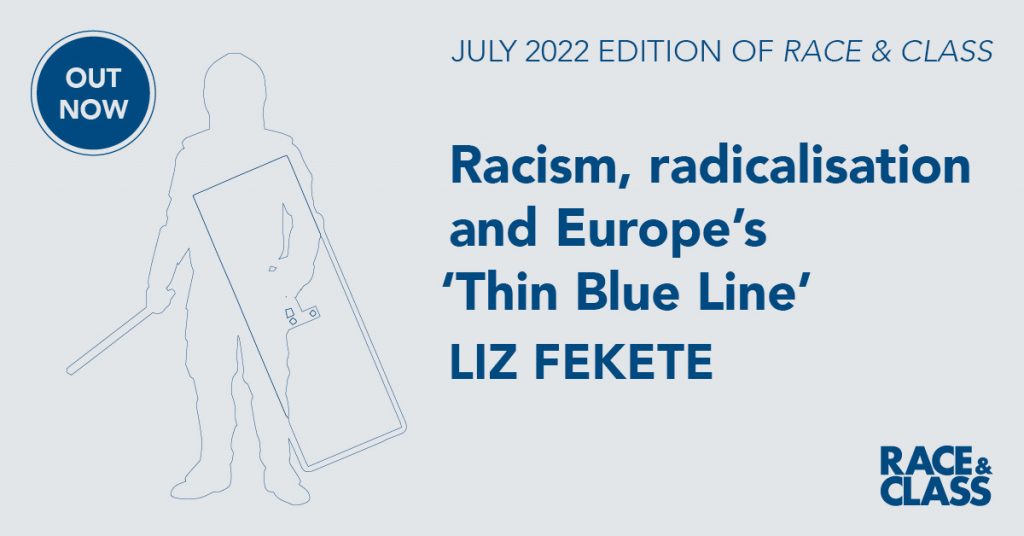 In Racism, Radicalisation and Europe’s ‘Thin Blue Line’, Fekete suggests that racism has become entrenched in policing, as rank-and-file officers organise on an increasingly extremist agenda. Sharing parallels with the ‘Blue Lives Matter’ movement in the United States, she shows how police trade unions and bodies are ‘aggressively intervening in the public space to defend the use of lethal weaponry, dangerous restraint techniques and racial profiling on the streets’, whilst portraying police as victims, which she argues insulates them from criticism and calls for more accountability, whilst undermining notions of ‘policing by consent’.

With several high-profile cases of police officers sharing racist and bigoted content in private WhatsApp groups and Facebook message boards in the UK and across the continent, Fekete argues that such attitudes reflect systemic biases which are embedded in the organisation and culture of policing. She adds that this is compounded by new data-driven technologies and a ‘predictive policing’ model which relies on the cooperation of other statutory authorities, giving police a ‘commanding role’ that blurs the boundaries between them and other local service providers.

‘This research contextualises dozens of cases of racial profiling, excessive use of force, extreme racist attitudes and far right entryism amongst European police officers, within the structures of modern policing, increasingly organised around data, biometrics, specialist paramilitary squads and the introduction of lethal weaponry. Our conclusion, that the dehumanising mindset, and overall sense of impunity and entitlement displayed in police WhatsApp groups, is a symptom, not a cause of authoritarian trends in policing, will no doubt make for uncomfortable reading. But the stakes are too high for anything other than plain speaking. Today’s crisis in policing is symptomatic of the wider crisis of democracy.’

‘This is a comprehensive overview of policing in Europe today. From analysing the response to the Summer 2020 Black Lives Matter protests to recent interventions around predictive policing – this research is an excellent addition to those who seek to understand the multifaceted operation of policing today. As debates around alternative approaches to public safety gain ground, the research is a must read.’

The research comes amid a crisis in policing with a recent Council of Europe report highlighting trends of police racism across Europe, whilst the UK’s Metropolitan Police force was last week placed in special measures.

Download Racism, Radicalisation and Europe’s ‘Thin Blue Line’ for free or order a physical copy of the issue from our online webstore.

Legacy of Violence: a history of the British Empire by Caroline Elkins (John Newsinger)