A recent tome by Prospect founder David Goodhart on The British Dream is getting unwarranted coverage in the media.

Have you stopped to think who the present commentators are about British race matters? BME leaders? No. Academics who have proven research credentials? No again. Or, as in the olden days, ‘home affairs’ specialists on credited nationals. Not at all. It is now simply opinionated journalists with ‘think tanks’ behind them. Whether it be Douglas Murray (Henry Jackson Society), David Goodhart (Demos) or Sunder Katwala (British Future) (stretching not so much from Right to Left, as from extreme Right to centre) we now have a set of self-appointed race pundits. That they are being listened to attests not so much to the rigour of their research or the freshness of their ideas but rather that they are serving back in respectable book and research report formats the opinions and attitudes already popularised in the tabloid media. Witness the following from Goodhart:

‘humans are group-based primates who favour their own and extend trust to outsiders with caution’;

‘liberals and multiculturalists have been slow to recognise that strong collective identities are legitimate for majorities as well as minorities’;

‘as the incoming groups after 1948 became more different, less effort was made to integrate them’. 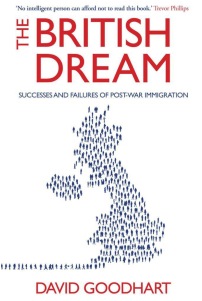 His thesis in a nutshell is that Britain is a more open society for minorities than ever before, but therefore a more fragmented one. He, a man of the Left, now realises how many ideas about race and immigration held by liberals/leftists – ‘immigrationists’ – no longer hold up. Immigration is a problem when either numbers are too high or the immigrants do not adapt enough, both of which have become most acute in the period from 1997. Most normal people (like him) actually do want to put their nation before universal humanity. And anyway white racism is no longer the problem it was and we should instead look at the ‘self-inflicted wounds’ – the oppression within ethnic groups.

To unpick this. Quite clearly Goodhart is not of the Left, any more than Jack Straw is working-class or Kate Middleton is middle-class. It may be where he began political life, but instead of seeing that since his views have radically changed, he can no longer be Left, he asks the whole of the liberal/Left world to change its views on racism, immigration and internationalism etc to his. Second, Goodhart, is actually not calling for integration but a form of assimilation or at least forced desegregation:  if people in ‘stuck’ communities – such as Pakistani Kashmiris and Somalis – do not adapt fast enough, he writes, they have to be ‘nudged’. Third, reading between the lines it is obvious that Muslims ‘the minority most at odds with the free-and-easy ways of modern Britain’ have influenced his conclusions and his 1997 watershed. Fourth, he makes the nonsensical assumption that (despite the intervention of China in so many of the world’s economies and the decline of our own) immigrants will still arrive in their hundreds of thousands on our shores in the years to come.

Oh, he can be taken apart very easily. There is no analysis in his work, no history, no cause and effect: much of post-war immigration ‘happened by accident’. Findings from survey reports jostle with anecdotes, a mishmash of opinions, urban myths and even prejudices he has gleaned from conversations with a variety of people – many of them, like him in the media or the opinion-forming business. ‘Newcomers were noisy and boisterous (especially Caribbeans) and brought with them unfamiliar smells (South Asians)’, ‘Somalis are notoriously clannish’; a Pakistani youth worker moving to an Oldham suburb found people in five houses on his street did not return his ‘hello’s’. And there is quite some confusion as to what constitutes ethnicity/community/nation/religion. Thus ‘entrepreneurial communities such as Indians and Tamils and Iraqi Kurds create jobs’. (For him Indians and Tamils are two sets of people, whereas millions of South Indians are Tamil.) ‘Different immigrant groups’, he writes, ‘can establish different profiles in different countries … Muslims in America are ‘more middle-class and more Middle Eastern in origin than British Muslims’. (But that is precisely because he is taking a religious category and not an ethnic or national group to define his ‘immigrant group’.)

There is one area in which he is half right: multiculturalism. He distinguishes between liberal (two-way street) and separatist multiculturalism which places ‘ethnic identity before citizenship’. But he provides no analysis for readers to understand how divisive what the IRR would term ‘ethnicism’ was. He fails to see that it was because politicians applied an ‘ethnic poultice’ to a racist wound that the problem occurred – under Thatcher after the 1981 Scarman report. For not coming out with any other policy to counter racism and exclusion, successive governments should be held responsible for any current segregation rather than ‘problem groups’ as he would have it.

The influences on Goodhart are clear: Trevor ‘sleep-walking to segregation’ Phillips, David Willetts (Tory) who in 1998 pointed out the ‘progressive dilemma’ that as ‘values and lifestyles become more diverse it becomes more difficult to sustain the legitimacy of risk-pooling the welfare state’; the book The New East End (Labour-ish) by Geoff Dench and Kate Gavron which argued that after the war, ‘many people were reluctant to share’ welfare – ‘the inheritance for decades of deprivation, depression and sacrifice with newcomers’; and  the Kenan Malik/ Munira Mirza (ultra-leftist/libertarian rightist)  school of ‘racism is over’. Effectively they all sing from the same very British hymn-sheet. Goodhart is not the iconoclast he holds himself out to be but a journalist with a populist bee in his bonnet about immigration And the book is having an impact because it purports that the Left is now saying what the Right has said all along.

But there is nothing new here, nothing Left here and nothing well-researched here. It is difficult not to be disparaging when decades-long struggles over issues or concepts are written out of history, when Javaid-come-latelys are passed off as griots and received ignorance as wisdom.

Read another review of The British Dream by David Edgar here

Read another review of The British Dream by Ian Birrell here

David Goodhart's The British Dream is available for £20 from Atlantic Books.

I thought it was stretching the imagination somewhat to read Goodhart say in The Guardian article that equality had become a banal subject. I hope he will read my forthcoming book, Dear Birmingham, for a different perspective.

This is exactly the way in which Goodhart should be dealt with, like the dangerous fool her is.

Jenny,
For a present day, non-academic perspective on British race matters I would recommend “Playing the Race Card (A Chip on my Shoulder)” by Christiana O’Connor (Amazon Kindle).

I doubt if this counterculture book will be receiving any press coverage, unwarranted or otherwise.

My oh my. Such vitriol.

Goodhart cites plenty of academic and statistical sources in his book.

Some migrant communities do much better than others.

– Africans from West Africa outperform those from Somalia.

The Left hates all this because it undermines the narrative of a unified ‘BME’ experience where all the problems can be explained by racism.

You are in complete denial about the underperformance of the Mirpuri and Somali communities and the role of backward, rural, superstitious, patriarchal cultures in contributing to this outcome. Other, hardworking, ethnic groups are completely exasperated at being associated in any form with the ‘stuck’ communities.