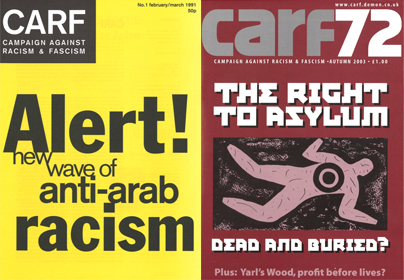 A vital resource for those interested in the history of anti-racist campaigning has now been made available on the IRR’s website. 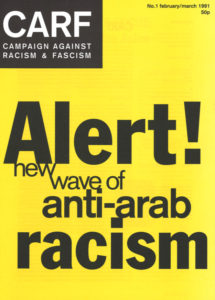 Seventy-two issues of the magazine CARF published between 1991 and 2003 are now available to download free of charge here. CARF reflected and spoke to the activist movements in the UK over that time, providing facts, analysis, interviews, cartoons – from its first number, which warned of a nascent anti-Arab racism (after Operation Desert Storm), to its last one, which exposed the profit from the outsourcing of asylum detention, the horrors of deaths in custody, implications of legal aid cuts and the expanded definition of anti-Semitism. Many of the issues and campaigns which now seem just commonsense were first being headlined in CARF – the lifeblood of the movement.

CARF was produced, not for profit, by a voluntary collective based at the Institute of Race Relations. (For a few years, CARF managed to employ a worker – first Sujata Aurora and then Nana Odoi – with financial support from radical, non-charitable sources.) But most of the magazine’s output depended on input from staff connected to the Institute of Race Relations (the core including, for most of the time, Liz Fekete, Frances Webber, Hilary Arnott, Nancy White, Pat Kahn, Jenny Bourne, Arun Kundnani and Harmit Athwal) with additional support from an incredibly dedicated band of copy-editors, designers, photographers and cartoonists and, from time to time, the input of cases and stories from lawyers and local campaigns (such as Southall Monitoring Group, Newham Monitoring Project, the National Coalition of Anti-Deportation Campaigns and the National Civil Rights Movement). The Collective met each Monday evening to discuss content and then had a full Saturday of work for each issue, typing, editing, proofing and designing the magazine. The cost of printing and distributing the A4 16-page publication was met mainly from subscriptions and regular monthly donations from a whole host of CARF supporters across the country. CARF was a real collective. 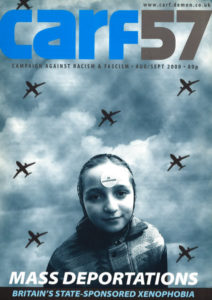 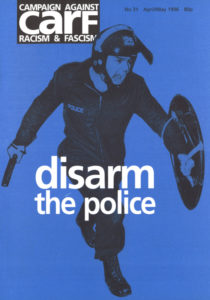 It may be worth explaining now – when so much ‘anti-racist campaigning’ is around racial ideas and conducted on social media – the way that CARF conceived of anti-racism. Though it was not party-politically aligned, and therefore not attached to any orthodoxy, it did stand for a set of political principles. The first one was that fascism had its roots in racism and thus it was necessary to fight racism and therefore fascism – as opposed to groups like the Anti-Nazi League, which fought fascism and incidentally racism. And the fight against racism meant a fight against state racism – which included everything from immigration, asylum policy, policing and the criminal justice system to the super-exploitation of migrant workers. For the CARF Collective it was the lived experience on the ground of the harshest manifestations of racism that had to be exposed – in the words of A Sivanandan, ‘the racism that kills’. That meant examining cases of deaths in custody, brutal racial violence, immigration raids, refugee abuse and detention, school exclusions, media scare scenarios, and the like. Cases, he argued, could be turned into issues, issues into causes and causes into a movement. But racism itself did not stand still, it changed its contours, impact, victims, emphasis depending on changes in economic and political conditions. Hence CARF was one of the first places to examine the impact of Fortress Europe, growing Islamophobia, and the move to xeno-racism, the deaths in the Mediterranean, the resurgent Right in Europe. 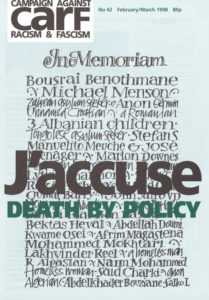 The CARF magazine now available to download is actually the fourth incarnation of something in print called CARF. CARF first appeared in late 1976, in the style of Temporary Hoarding magazine, as a professionally illustrated A3 broadsheet-style paper, produced by members of Kingston and Richmond Anti-Racist Committee and later adopted as the paper of the (London) Anti-Racist, Anti-Fascist Co-ordinating Committee (ARAFCC) – a federation of twenty-six broad-based committees that had sprung up across Greater London in response to the growth of popular racism and the rise of the National Front. Six numbers of the original CARF were designed/produced by ‘Minda’. It then continued as an occasional newspaper under the auspices of the CARF Collective from 1977-79, producing three issues. From 1979 to1990 the Collective provided its own four-page anti-racist supplement which was included in each edition of the monthly anti-fascist magazine Searchlight. But in 1991, the CARF collective decided to publish its own bi-monthly magazine with analysis, features, interviews, news from campaigns and a regular calendar. The magazine later went quarterly. (It is seventy-two issues of this CARF magazine that are available now on IRR’s website.) In 2003, when IRR News – an online service – was created to serve the movement, it was decided the time had come to end the print magazine. 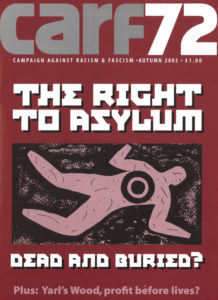 The seventy-two issues of CARF can be accessed and downloaded as single issues. You cannot download individual articles, nor, unfortunately, can you search contents. (To provide such facilities would have been an impossibly costly undertaking.) However, full contents of each issue is clearly delineated so topics and cases can be easily found. And scanning through the whole seventy-two – which includes the all-important covers – can give a historian of the era a really potent overview of happenings and struggles in those key twelve years.

Congratulations. Please more work on brexit and immigration would me most welcome from your angle.